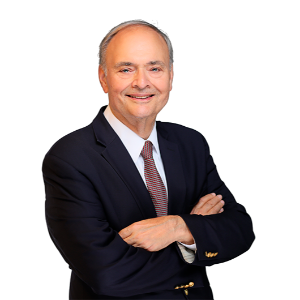 Navigate to map location for Emanuel L. "Manny" Rouvelas Visit the website for Emanuel L. "Manny" Rouvelas at http://www.klgates.com/Emanuel-L-Rouvelas
Your comment has been submitted!
We have encountered an error and are unable to process your comment at this time. Please refresh the page and try again later.
Add Comment
In making your comments, please do not refer to a pending legal matter.
Share My Profile
Post on Social

Emanuel (“Manny”) Rouvelas engages in a wide-ranging federal practice representing leading companies and trade associations in the transportation, telecommunications, high technology, hospitality, and manufacturing industries regarding their Washington, D.C. activities and strategies. He has served as lead government affairs counsel for major companies in transnational acquisitions, mergers, and corporate reorganizations.

He is a recognized authority in Maritime law and for more than three decades has traveled globally to advise the CEOs of many of the world’s leading shipping companies. His practice has taken him to more than thirty countries, and he often works with the executive branch, Congress, and foreign embassies and governments on international trade and transport matters. He founded the Washington, D.C. office of Preston Gates and guided its growth to more than 140 partners and employees at the time it was merged into K&L Gates on January 1, 2007.

He is and has been consistently ranked as one of the country’s top lawyers in both maritime law and in government affairs, including Chambers USA, Best Lawyers in America, Super Lawyers and similar publications. In its 30th year anniversary edition, the Legal Times recognized him as “one of the greatest Washington Lawyers of the past 30 years”, a “legal visionary”, who helped turn Washington, D.C.’s legal and lobbying community into an international powerhouse. Eight times, from 2005-2013 he was named one of the 50 “Top Lobbyists” (out of 12,000) by The Hill newspaper based on surveys of Members of Congress and staff.

In 2013 he was the recipient of the most prestigious award conveyed on U.S. Maritime industry leaders, the Admiral of the Ocean Sea Award, presented by the United Seaman’s Service, becoming the only practicing lawyer in its 44-year history to have received this award. Also in 2013, he was the inaugural recipient of the Association of Government Relations Professionals (AGRP) career achievement award for exemplary service to the profession, demonstrated integrity and ethical standards, engagement in civic and pro-bono work and mentoring.

Mr. Rouvelas has served as an advisor to two U.S. presidential transitions, a bipartisan Congressional Caucus, an executive branch reorganization, several senators and congressmen, and many political campaigns. Prior to joining K&L Gates, he was counsel to the U.S. Senate Committee on Commerce and chief counsel to its Merchant Marine and Foreign Commerce Subcommittees where he had lead staff responsibility for the enactment of 32 public laws. Included was major legislation relating to vessel construction and operation, oil spill prevention, vessel traffic systems, recreational boat safety, Coast Guard and Maritime Administration programs.

Mr. Rouvelas has long been committed to the importance of strong ethical governance in both the public and private sectors and has taught, lectured and counseled clients on governance issues. He completed the Advanced Management Program at Harvard Business School in 1996 and the Program on Corporate Governance for Directors at Stanford Business School in 2006. He has twenty years experience serving on the boards of directors of three U.S. public companies and an additional twenty years of service on the boards of directors of nonprofit charitable organizations. He is a Director of the Greater Washington Board of Trade, the largest regional network of business and nonprofit leaders; a member of the Smithsonian’s Advisory Board for the National Zoo; a lifetime Trustee and former Vice-Chairman of the American College of Greece in Athens; and served nine years through 2013 as a Regent of the American Architectural Foundation

269 The Best Lawyers in America® awards

82 Best Lawyers: Ones to Watch in America awards

"Manny is a superior legal adviser and he has helped to guide the development of the strategic relationship between the firm and our organization. He has a well reasoned approach to meet the challenges of international business in the current economic and political environment. He is a gifted and trusted adviser and partner."