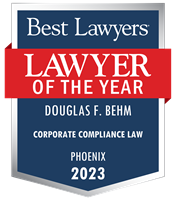 Mr. Behm began his career as an assistant district attorney in Kings County (Brooklyn), New York in 1974. From 1977 to 1987 he served as an attorney with the United States Department of Justice in New York City (Eastern District). While with the Justice Department, he prosecuted high profile organized crime cases involving criminal RICO, labor racketeering, tax evasion, narcotics trafficking, securities fraud, and official corruption.

After leaving the government in 1987, Mr. Behm joined the Morrison & Hecker law firm (now Stinson Leonard Street) in Kansas City, where he gained extensive experience representing federal financial institution regulators. Among other cases, he was lead attorney for the Resolution Trust Corporation in a $1 billion civil RICO lawsuit against the officers, directors, and borrowers of a large savings and loan in Phoenix, Arizona.

From 1993-1995, Mr. Behm was a sole practitioner, defending corporations, public officials, corporate officers, and individuals in complicated criminal matters and conducting corporate internal investigations. From 1995-2008, he was of-counsel, and then a partner, in the Jennings, Strouss & Salmon firm in Phoenix, where, in addition to his criminal defense and corporate compliance activities, he defended and prosecuted complex civil litigation, including breach of contract, securities fraud, civil RICO, breach of fiduciary duty, and intellectual property cases. He was chairman of the litigation department at Jennings Strouss, which included more than 50 attorneys.

In March 2008, he left Jennings Strouss to resume his solo practice. Mr. Behm continues to provide his clients with personal, efficient, and effective representation. By assembling teams of attorneys, investigators, paralegals and other professionals, he can manage large, complex litigation as well as smaller matters where additional personnel are not necessary. The unusual breadth of his civil and criminal law experiences gives him exceptional insight into complex civil litigation, regulatory investigations, and criminal cases.