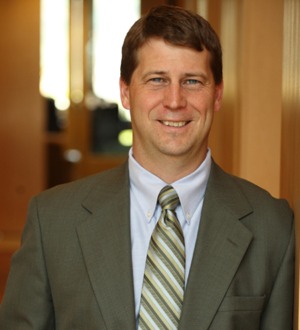 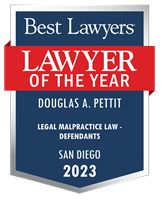 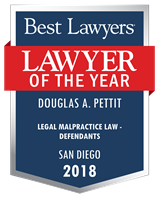 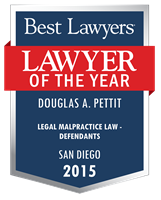 Douglas A. Pettit has extensive trial and litigation experience in the areas of civil litigation, business litigation, and professional liability. He has tried over 50 cases in California. His extraordinary record of favorable outcomes and exemplary client service has resulted in recognition by his peers over the years. He was inducted into the American Board of Trial Advocates in 2007 as the youngest member of the San Diego Chapter and has achieved Martindale-Hubbell’s highest rating for legal ability and ethical standards. He has been selected for inclusion in the San Diego Super Lawyers list every year since 2007 and most recently listed as one of the Top 10 San Diego Super Lawyers for 2015 and 2016. Doug has been recognized by every possible “Top Attorney” list for San Diego including “San Diego’s Top Attorneys” by The Daily Transcript, the San Diego Business Journal’s Inaugural Best of the Bar in 2014, the San Diego Magazine’s Top Lawyers, and Best Lawyers in America. Notably, Best Lawyers in America awarded Doug as Best Lawyers’ 2015 and 2018 San Diego Legal Malpractice Lawyer of the Year. Doug is also a Fellow of the American Bar Foundation, an honor limited to one third of one percent of the lawyers in America.