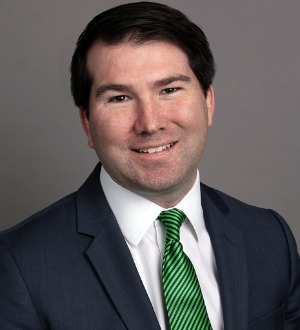 Navigate to map location for Donald J. Ward III Visit the website for Donald J. Ward III at https://www.searcylaw.com/attorneys/donald-j-ward-iii
Your comment has been submitted!
We have encountered an error and are unable to process your comment at this time. Please refresh the page and try again later.
Add Comment
In making your comments, please do not refer to a pending legal matter.
Share My Profile
Post on Social

At age 26, in his first jury trial, Mr. Ward obtained a verdict of $824,200, which was more than thirteen times what the defendant had offered to settle the case. Since joining Searcy Denney, he has recovered in excess of $100 million on behalf of his clients. He currently serves as President of the Palm Beach County Justice Association, a countywide organization of nearly 500 lawyers and paralegals committed to protecting victims of negligence and injustice and fighting for fair access to courts for all.

Mr. Ward’s practice focuses on wrongful death and catastrophic injury cases resulting from automobile accidents, medical negligence, products liability, and premises liability. He is listed in The Best Lawyers in America, has been recognized as a Rising Star by Florida Super Lawyers since 2013, and has been perennially selected for inclusion in The National Trial Lawyers Top 40 Under 40 for the State of Florida since 2014. At age 29, Mr. Ward was admitted into the membership of the Million Dollar Advocates Forum and the Multi-Million Dollar Advocates Forum. He is rated AV Preeminent, which is the highest peer rating standard given by Martindale-Hubbell.

Mr. Ward grew up in Virginia Beach and earned a bachelor’s degree in history and religious studies from the University of Virginia in Charlottesville. As an undergraduate, he studied abroad at the University of Oxford in England, where he researched and wrote about the health care systems of different countries.

While a student at the University of Notre Dame Law School, Mr. Ward was vice president of the Student Bar Association, president of the Phi Alpha Delta Legal Fraternity, and a mediator with the Notre Dame Legal Aid Clinic. He also coordinated a course at Notre Dame that allowed law students to visit different cities and gain a better understanding of the pro bono possibilities available to them following graduation.

Mr. Ward is admitted to practice in the State of Florida, the Commonwealth of Virginia, the District of Columbia, the Eleventh Circuit Court of Appeals, and the United States District Courts for the Northern, Middle, and Southern Districts of Florida and the Western District of Virginia. He is an EAGLE member of the Florida Justice Association and a former board member of the FJA Young Lawyers Section. He is also a member of the Palm Beach County Bar Association, American Bar Association, American Association for Justice, the Florida Supreme Court Historical Society, and the Notre Dame Law School Order of St. Thomas More.

Mr. Ward lives in northern Palm Beach County with his wife, Abbey, and their son, Jack.