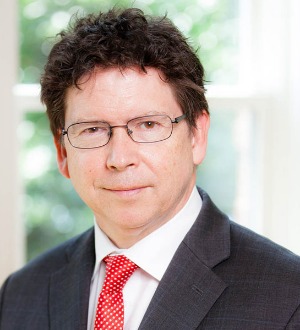 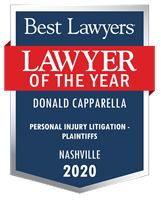 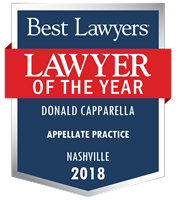 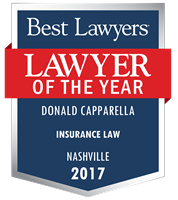 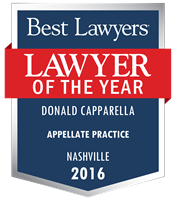 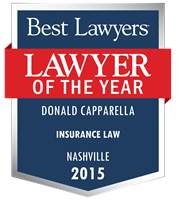 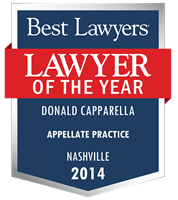 With more than 30 years of experience, Donald Capparella has established a reputation as one of Tennessee’s most respected litigators at both the trial and appellate levels. Individuals, businesses, and non-profit organizations trust him to vigorously represent their interests and get results.

Mr. Capparella handles all manner of civil litigation throughout the state and federal courts. He has secured a landmark award for a widow and child wrongly denied insurance proceeds, and he is regularly called upon to handle complex matters including construction defects, business disputes, personal injury, and insurance matters. Highly regarded for his experience in tort litigation, Mr. Capparella has been counsel for many of Tennessee’s landmark cases over the last twenty years.

Recognized as one of Tennessee’s preeminent appellate lawyers, Mr. Capparella has handled more than 400 appeals in state and federal courts. In 2016, he was elected to membership in the American Academy of Appellate Lawyers. Named the Best Lawyers® 2020 Nashville Personal Injury for Plaintiffs “Lawyer of the Year,” he leads the firm’s appellate practice team which manages civil, domestic, and criminal appeals throughout Tennessee. As a consultant, Mr. Capparella regularly assists trial practitioners, providing services ranging from trial court preparation to handling of the entire appeal.

He also serves as the editor and contributing author for the Nashville Bar Association’s Appellate Practice Handbook. He is co-author of the Tennessee Practice Volume 17 on Comparative Fault, published by Thomson Reuters. He has been an instructor of legal writing at Vanderbilt University School of Law and has taught advanced legal writing at the Nashville School of Law. He served as an editor for the Tennessee Tort Law Letter, a monthly report of leading tort cases published by M. Lee Smith Publishers, for more than 20 years.

Frequently in-demand as a speaker, Mr. Capparella regularly leads continuing legal education seminars for organizations such as the Nashville and Tennessee Bar Associations. His popular "Much Ado About Ethics" seminar combines Shakespeare's timeless works with modern legal ethical dilemmas, with proceeds benefiting the Nashville Shakespeare Festival. In 2013, the Tennessee Supreme Court appointed him to serve on the Tennessee Commission on Continuing Legal Education and Specialization.

A passionate supporter of the arts, Mr. Capparella founded the Nashville Shakespeare Festival in 1988 and has remained actively involved as a director, actor, fundraiser and board chairman. The Festival provides professional theatre at no charge to more than 15,000 Tennesseans annually through its critically acclaimed “Shakespeare in Centennial Park.” The Festival’s winter home is in residence at Belmont University, and the company tours throughout the year to schools across Tennessee.

Mr. Capparella is a member of the Nashville and Tennessee Bar Associations and the Tennessee Association of Justice. He has served as chair of the appellate practice committee of the Nashville Bar Association and was a barrister in the Nashville Chapter Harry Phillips American Inn of Court. Mr. Capparella has been recognized by the Nashville Business Journal as “Best of the Bar,” as one of Business TN magazine’s “150 Best Lawyers,” and he has been named a Mid-South Super Lawyer. He has an AV® Peer Review Rating from Martindale-Hubbell. He has been selected by his peers for inclusion in Best Lawyers in America©, where, for the 2018 edition, he is listed in the fields of appellate practice, insurance law, and personal injury law.