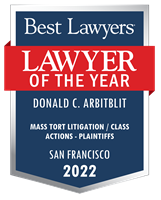 A Lawyer with Unmatched Expertise in Medical and Scientific Cases

Donald C. Arbitblit is a leader among plaintiffs’ attorneys in assessing the legal, medical, and scientific aspects of personal injury, mass torts, and environmental and toxic exposure litigation. Mr. Arbitblit has served on Plaintiffs’ Science/Expert Committees in several national cases, and he is currently a member of the Plaintiffs' Steering Committee in the Actos bladder cancer injuries federal multidistrict litigation that settled in 2015 for $2.4 billion.

Mr. Arbitblit has specialized in toxic exposure and defective pharmaceutical cases for twenty years. From 1994 to 1998, Don was lead counsel for a certified class of women who were intentionally exposed to radioactive iron without their consent while receiving prenatal care at Vanderbilt University hospital in the 1940s. Settlement included $10.3 million and a formal apology from Vanderbilt University.

Mr. Arbitblit also played a leading role in California coordinated litigation arising out of the Sacramento River Spill of 1991; the release of a sulfuric acid cloud from the General Chemical plant in Richmond, California in 1993; and a 1995 toxic release from the Unocal refinery in Rodeo, California. These cases resulted in settlements of approximately $300 million.

Mr. Arbitblit has authored articles on environmental and pharmaceutical drug issues for Ecology Law Quarterly, Mealey’s Emerging Toxic Torts, and Hastings West-Northwest Journal of Environmental Law and Policy. Super Lawyers magazine has recognized Mr. Arbitblit as a Super Lawyer for Northern California five times. He has lectured to attorneys on science issues in pharmaceutical defect litigation for the American Association of Justice in 2011 (Yaz) and 2013 (Actos).