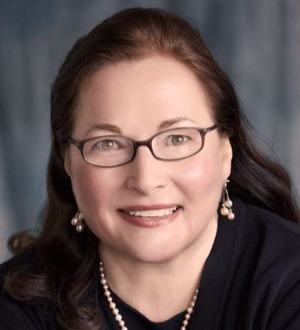 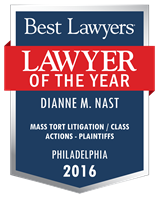 Led by Dianne M. Nast, who has extensive experience in consumer litigation, NastLaw LLC is a nationally recognized law firm with a long track record of success in complex litigations.

Ms. Nast holds an AV Martindale-Hubbell rating. She has been selected to be listed in each edition of The Best Lawyers in America (Antitrust Law, Mass Tort Litigation, Class Actions, Personal Injury Lawyer) since 2003. The National Law Journal has selected Ms. Nast as one of the nation’s top fifty women litigators. Ms. Nast has also been repeatedly selected by Philadelphia Magazine as one of Philadelphia’s Best Complex Litigation Lawyers. She has been named as one of Pennsylvania’s Top Fifty Women Lawyers. She has been named a Super Lawyer every year since 2002. She appears in numerous Who’s Who publications. Ms. Nast is listed in Chambers US.

In April, 2015, the American Bar Association Tort and Trial Practice Section awarded Ms. Nast its Pursuit of Justice Award. In June 2016, Ms. Nast was selected by The Legal Intelligencer, Pennsylvania’s leading legal newspaper, to receive its Life Time Achievement Award. In 2017, The Legal named Ms. Nast a recipient of its Professional Excellence Award.

Ms. Nast served as a Director of the Federal Judicial Center Foundation for eleven years. In 1998, then Chief Justice William H. Rehnquist named Ms. Nast Chair of the Board of Directors of the Foundation.

Judge Edward Becker, then Chief Judge of the United States Court of Appeals for the Third Circuit, appointed Ms. Nast to serve as a member of the fifteen-member Third Circuit Task Force on Selection of Class Counsel. The Task Force issued a report, Selection of Class Counsel, 208 F.R.D. 340 (2002), which has been cited over 100 times in court opinions. Ms. Nast was also selected by The American Law Institute to serve on ALI’s Principles of the Law of Aggregate Litigation Project.

Ms. Nast has served as Lawyer Chair of the Judicial Conference of the United States Court of Appeals for the Third Circuit. She is a member of the Historical Society of the Third Circuit, and chaired the Circuit’s Centennial Celebration.

She was appointed by the late Chief Judge Alfred L. Luongo to Chair the Eastern District of Pennsylvania’s Lawyers Advisory Committee, and served for four years in that position. She served for three years as President of The Historical Society for the United States District Court for the Eastern District of Pennsylvania, and as Editor of the Society’s Annual Historical Calendar.

Ms. Nast served six years as a Director on the Board of the Public Defender’s Office of Philadelphia. Ms. Nast was selected as one of a small group of Philadelphia attorneys to be appointed Judge Pro Tempore, serving as presiding Judge in major civil jury cases in the Court of Common Pleas.

She was a co-founder and member of the Board of Directors for the Center for Research on Women and Newborn Health and served as President of the Foundation’s Board for ten years. She served on the Lancaster Catholic High School Board of Education and chaired a local elementary school board for four years. 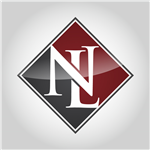