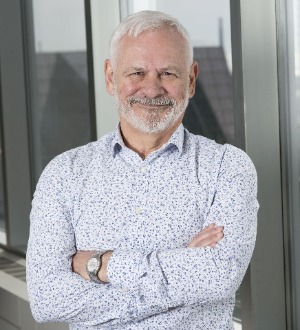 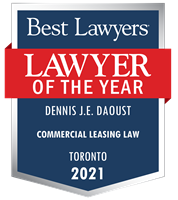 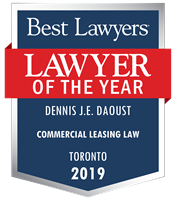 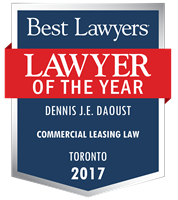 Dennis has been listed in the "Most Frequently Recommended" category of Leading Practitioners in Toronto in the Canadian Legal Lexpert Directory, and has also been included in the American Lawyer Guide to the Leading 500 Lawyers in Canada, in each year that they have been published. He is also included in the inaugural 2006 edition of The Best Lawyers in Canada. He has been qualified in court as an expert in commercial landlord and tenant law.

Since 1978, his practice has focused on commercial leasing and development law. He has extensive experience in all aspects of large and complex commercial, retail, office and industrial leasing transactions across Canada and the United States.

He was called to the bar in 1974. Until 1978, he practised commercial real estate law with a law firm that eventually merged with the Toronto firm of Cassels, Brock, Blackwell. He joined The Cadillac Fairview Corporation Limited as legal counsel in 1978 and as Vice-President and General Counsel of Cadillac Fairview Shopping Centres, Canada, he supervised all legal aspects of Shopping Centre operations. In 1986, he assumed responsibility for all aspects of legal services for Cadillac Fairview's U.S. Shopping Centres. In 1988, he joined the leasing department of a large Toronto law firm and became a partner there in 1989. In 1995, he co-founded the firm of Daoust Vukovich LLP.