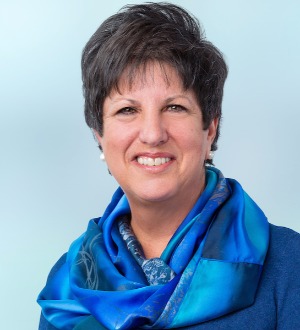 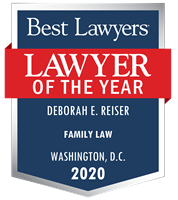 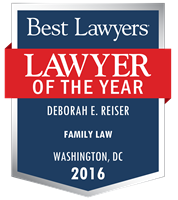 Deborah Reiser is a divorce attorney at Lerch, Early & Brewer in Bethesda, Maryland. She leads the firm’s Family Law group, which was named one of the Washington, D.C. area’s top tier family law practices by U.S. News & World Report/Best Lawyers. Her practice includes the litigation and negotiation of divorces, including the identification, valuation, and distribution of property; alimony; child custody, support and visitation; mediation and arbitration; and related proceedings.

Knowledgeable, responsive, and compassionate, Deborah is committed to understanding her clients’ positions and is seen as a tough and formidable advocate for their interests. Even in the most contentious of situations, Deborah helps her clients weather the difficult times that often accompany divorce with extraordinary wisdom and a sense of humor.

Deborah is one of the first women in Maryland elected to the American College of Trial Lawyers (ACTL). Fellowship in the ACTL is extended only by invitation, after careful investigation, to those experienced trial lawyers who have mastered the art of advocacy and whose professional careers have been marked by the highest standards of ethical conduct, professionalism, civility, and collegiality. She has earned distinctions as a Master of the Bench of The Montgomery Inns of Court and a Fellow in the American Academy of Matrimonial Lawyers. In addition, she is an American Academy of Matrimonial Lawyers Certified Arbitrator.

Born in Utica, N.Y., Deborah graduated from Cornell University with a Bachelor of Arts in Political Science and earned her Juris Doctor from Northeastern University School of Law.

Admitted to practice in Maryland and the District of Columbia, Deborah is a former president of the Maryland Chapter of the American Academy of Matrimonial Lawyers and served on the Maryland State Bar Association's Family and Juvenile Law Section Council. She also has served in several leadership roles for the Montgomery County Bar Association and taught family law at the National Law Center of The George Washington University.

In her spare time, Deborah loves to travel and read.

33 The Best Lawyers in America® awards