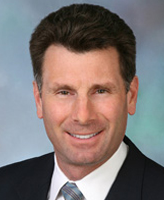 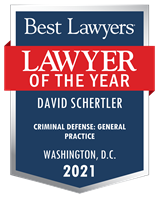 David Schertler is widely recognized as one of the top white–collar criminal defense attorneys in the Washington area and nationwide. He founded Schertler & Onorato, LLP, in 1996 and has built the firm’s reputation as a premier litigation boutique through his broad experience with criminal and civil investigative and trial matters and the results that he has achieved for his clients.

Mr. Schertler is known for his skilled and tenacious representation of individuals and entities in criminal and civil investigations covering a wide range of substantive areas and conducted throughout the United States and abroad. These representations have included such high–profile matters as the KPMB tax shelter investigation in New York City; the Enron, Worldcom, and AOL financial fraud investigations; the criminal investigation and prosecution of Blackwater security guards for events occurring during the Iraq war; the Foreign Corrupt Practices Act (FCPA) “Africa Sting” prosecution dismissed by the government after consecutive trials resulted in no convictions; and the Teamsters’ corruption investigation in New York City. Mr. Schertler also has represented clients in connection with criminal and civil antitrust investigations in the United States, Asia, and South America, financial and securities investigations in the United States and Europe, and FCPA investigations worldwide. Mr. Schertler’s practice has included investigative and trial matters involving such diverse legal areas as bribery and gratuities law, mail and wire fraud, honest services fraud, federal procurement regulations, campaign finance law, conflict of interest, health care fraud, money laundering, environmental crimes, securities and tax laws, and false statements and perjury. Mr. Schertler regularly represents clients in hearings and depositions before Congressional committees and in internal investigations conducted by a range of federal agencies, including the Securities and Exchange Commission, the Federal Election Commission, the Department of Defense, and the General Services Administration.

Mr. Schertler’s substantive expertise and his deep understanding of the investigative process and the nuances and sensitivities of legal representation have attracted clients in a wide range of professions, including business executives, attorneys, elected officials, political appointees, military and law enforcement officers, and professional athletes. In many instances, Mr. Schertler assists his clients to resolve their legal matters without prosecution or other litigation. When matters do enter the court system, however, Mr. Schertler is a seasoned litigator who vigorously represents clients in criminal and civil cases and trials in federal and local courts throughout the country. His recent experience includes:

Mr. Schertler’s skills as a white–collar criminal defense attorney and litigator have earned him many honors. He is a Fellow in the American College of Trial Lawyers, an elite organization of the country’s leading trial lawyers. He has repeatedly been named one of the “Top 30 Lawyers” in Washington, D.C., by Washingtonian magazine. He has been recognized in consecutive years as a leading white–collar practitioner in Washington and nationwide by “Super Lawyers,” “The Best Lawyers in America,” and the “International Who’s Who of Business Lawyers,” among other publications. Mr. Schertler also frequently appears at conferences and on panels addressing current legal issues in the white–collar criminal field.