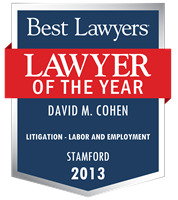 Mr. Cohen's areas of concentration include civil and criminal litigation, particularly personal injury, civil rights, employment law, and immigration and naturalization. He is a graduate of Harvard College (A.B., magna cum laude, 1970), where he was elected to Phi Beta Kappa, and Yale Law School (J.D. 1973). Before joining the firm in 1975, Mr. Cohen served as law clerk to the Honorable Caleb M. Wright of the United States District Court for the District of Delaware. He currently serves as a Trial Referee for the Connecticut Superior Court and as a Special Master in the United States District Court for the District of Connecticut. He is a member of the Connecticut Trial Lawyers Association. Mr. Cohen has participated on the boards of the Fairfield County Civil Liberties Union and Jewish Family Service of Stamford. He is past president of Temple Sinai and served on its Board of Trustees. Mr. Cohen's numerous civic and humanitarian activities include efforts to resettle refugees from the former Soviet Union. Mr. Cohen has also served as cooperating counsel in civil rights cases on behalf of the American Civil Liberties Union, and the Connecticut Bar Foundation named him a James W. Cooper Fellow.

Mr. Cohen has been recognized in The Best Lawyers in America since 1991 and has been listed since 2007 in Connecticut Super Lawyers in the fields of Employment & Labor, General Litigation, and Immigration.