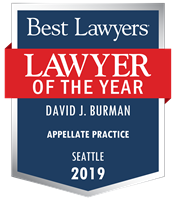 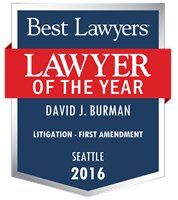 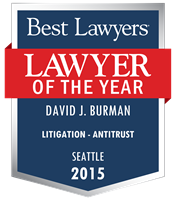 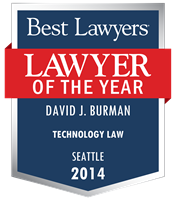 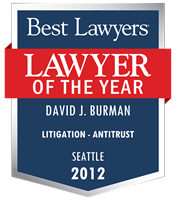 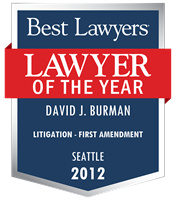 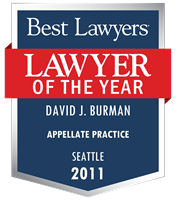 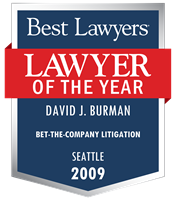 David Burman, a partner in the firm's Commercial Litigation practice, has more than 30 years of experience in litigation, including antitrust, appellate, class action, consumer protection, constitutional, media, patent and intellectual property, privacy, and other cases. He also counsels clients in these and other areas. He has worked on many high-profile cases, including two U.S. Supreme Court arguments, the trial contesting the 2004 Washington State Governor's election, Costco Wholesale Corporation's precedent-setting antitrust and constitutional challenges to state wine and liquor laws, and the Yellow Pages publishers' successful constitutional challenge to municipal restrictions on distribution. He was national counsel in the Pharmaceutical AWP class actions in a federal MDL and more than a dozen state courts. He served as a lawyer representative to the Ninth Circuit Judicial Conference in 2003 - 2006 and 2009, was a speaker at the 2010 Conference and served on the Ninth Circuit Rules Advisory Committee. He was selected as a fellow of the American College of Trial Lawyers and as a member of the American Law Institute, where he was an advisor in drafting the "Principles of Aggregate Litigation."

Dave has been chair of the firm's Commercial Litigation practice, has served on its management and executive committees, and has acted as client service partner for one of the firm's largest institutional clients.

265 The Best Lawyers in America® awards

"Dave is an outstanding lawyer and strategist. He is ethical, thoughtful, and persuasive. He is one of the best attorneys I have ever met."

"David Burman is an excellent attorney who will not disappoint if one is looking for counsel who will provide an objective assessment and legal analysis of a situation. He rightly has a superb reputation as being one of the best litigation attorneys in the Puget Sound Region. David is also practical in his approach, and can be trusted to provide the best advice one can hope for."

"Dave is a terrific lawyer - brilliant, passionate, creative, and tireless. He knows the right manner for all occasions, whether it is with courts, adversaries, or clients. His numerous pro bono contributions must also be applauded."

"I have worked with Dave Burman for more than 20 years on legal matters relating to libel, access to public records, reporter subpoenas, and similar matters that come up in newsrooms. Dave has always been responsive and helpful, even when issues crop up late on Friday afternoons, which they always seem to do. His counsel has ranged from informal advice over the telephone to representing a reporter in a long legal dispute involving a former sheriff. The advice has always been on target. I don't believe we've ever failed to prevail in actions relating to freedom of information or protection of reporters' rights. Dave also has been cognizant of the cost of counsel and has assigned legal interns or lawyers with less experience to help offset costs. However, he has always maintained a high level of involvement in the work being done, and I have never felt we ever got less than Dave's best. He has also come to the newspaper on several occasions and held workshops with reporters and editors at no cost. To say that I would recommend him highly would be an understatement."