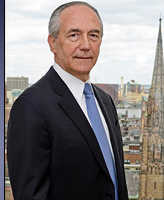 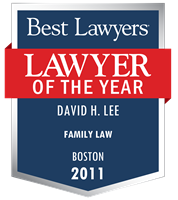 David H. Lee is recognized locally and nationally as a preeminent Family Law practitioner. The focus of his practice over his entire career has been in the field of Family Law.

Mr. Lee has consistently been recognized in The Best Lawyers in America, in the area of Family Law, since its first publication in 1983, and was recognized as Best Lawyers' 2011 Boston Family Lawyer of the Year.

LAWDRAGON Magazine honored Mr. Lee in November 2005, Volume 1, Issue 1 as one of the "500 Leading Lawyers in America".

Whether as a courtroom advocate, negotiator, or counselor, Mr. Lee is committed to using his knowledge and experience to guide and assist his clients through the legal process in an effort to minimize the potential adverse impact upon the parties and their children.

"David Lee helped me through a divorce in an extremely professional, ethical, and compassionate manner. He is very knowledgeable and detail oriented compared to other lawyers, and never failed to point out pros and cons of potential decisions. He managed things quickly and conveyed information clearly. He is very well thought of in the legal community and was obviously well known and well thought of by the court justices. He was very good about getting back to me. I highly recommend him."

"Mr. David Lee has represented me for over five years, and he has provided insightful and thoughtful counsel. Perhaps most importantly, he has a deep understanding of all aspects of the law and finance relevant to his practice. He is able to incorporate analysis of the implications of tax, corporate, securities, and family law into divorce agreements. His goal is to avoid litigation and achieve a mutually beneficial settlement, but he is prepared and ready to litigate if necessary. His personal involvement in cases makes him exceptionally valuable to his clients."

"David has been my lawyer for 10 years in what can only be described as a very long, tedious, unpleasant, complicated divorce. The words that come to mind to describe David are: professional, integral, impeccable ethics, efficient, responsible, responsive, reliable, quiet, confidence, well prepared, extroadinary listener, and always "cool" and in control. He is warm, sensitive, and focused - a "natural" teacher and "my voice of reason." He is THE BEST!!!"

"If you put the CEO of a hedge fund, a Professor of Negotiations from Harvard Business School, and a military strategist into a mixing bowl, and throw in years of high-level experience, you will only begin to get the essence of Attorney David Lee. He is a strategist and litigator with rare foresight. Compassionate, responsive, totally focused, and supported by a staff with decades of experience, he imbues the highest level of confidence and trust so important in these emotional cases. He will spend countless hours with every detail of the case, mapping and executing a plan with input from his client, and always with a focus on achieving both a long and short-term objective. He is a wonderful listener with a sense of fair play; he is respectful of the emotional and pragmatic needs of his client, and he is a legal heavyweight who can go toe to toe with anyone in the divorce arena. Totally against all odds, and with subtleties and precision, I, as a former attorney, have rarely seen, Attorney David Lee achieved a result in my case (custody) that was unheard of in the legal community. His reputation is flawless and his acumen in unparalleled."

"David's calm, non-combative demeanor, his elegance and calm, and his goal-oriented focus, combined with mastery of the contextual detail and relevant law, proved extremely effective in very difficult and complex situations. As a lawyer, I recognize and appreciate David's mastery of his craft. As a physician, I credit his practical knowledge and skill in understanding human psychology as contributing to his success. As a businessman, I value his efficiency. As a parent, I appreciate his ability to be effective without being destructive."

"I have known David for 20 years and have used his services twice. I have found him to be competent, confident, calm, and extremely knowledgeable about the law, but, more importantly, about human nature through the very difficult process of divorce. He manages expectations, explains thoroughly what the options may be, and gives an assessment of the outcome as one chooses to go down one path or another. He is sensitive to the need and anxieties of not only the two parties of a divorce, but the children as well. He is very thorough with an attention to detail that is extraordinary; yet he has an ability to keep his perspective. He is a very fine, gentle man who can be tough when he needs to be and is a skillful negotiator. He is a fine attorney and a credit to his profession."

"I would not have been able to get through the most difficult time in my life without David Lee's help. He was always completely professional, focused, and present with me as a client. He has the uncanny ability to comfort his clients while offering them the best and most productive advice all through the divorce process. I always felt I was heard and respected. I am deeply grateful for all his help."