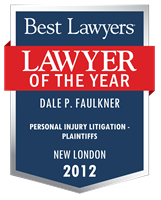 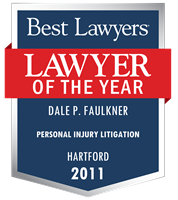 Dale Faulkner is recognized as one of Connecticut's premier trial lawyers as a result of his trial successes, his genuine commitment to his clients and his visible and infectious enthusiasm for the practice of law. Additionally, he holds the distinction of being board certified as a Civil Trial Advocate by the National Board of Trial Advocacy.

Faulkner's consistent success and high standards have placed him among the select few lawyers in the State chosen for all editions of The Best Lawyers in America. In 2011 and 2012, he was also named "Lawyer of the Year" by Best Lawyers for the category of personal injury litigation. Faulkner continues to edit his highly successful Connecticut Trial Evidence Notebook, published by Lexis Law Publishing, which is commonly used by lawyers and judges throughout the State. He is also a fellow of the American College of Trial Lawyers (by invitation).

A native of New Haven, Faulkner graduated from Providence College and then from the University of Connecticut School of Law where he was chosen to serve as Editor-in-Chief of the Law Review. Once admitted to the bar, he quickly established a solid reputation as a creative and successful civil advocate, winning record verdicts previously unseen in New London County.

His love of trial work and his vision led to the founding of the firm in 1986. By then, Faulkner was an active lecturer to other trial lawyers and a teacher to hundreds of aspiring trial lawyers as an Adjunct Professor of Law at the University of Connecticut School of Law where he taught for over 20 years.

Faulkner continues to seek redress for all types of victims of injury, and has in recent years won successful verdicts on behalf of a victim of sexual abuse, for a police officer injured in the line of duty, for a truck driver hit head-on, suffering multiple fractures, and for an ailing child given the wrong prescription medication by a pharmacy. In addition, other lawyers routinely seek his guidance and judgment as both a mediator and arbitrator of substantial disputes.

A long time resident of Ledyard, where he raised his five children, he and his wife now live in Niantic.