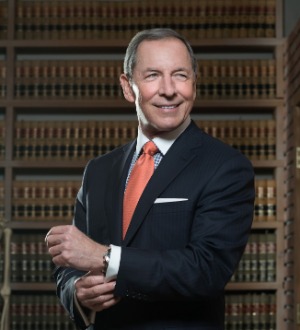 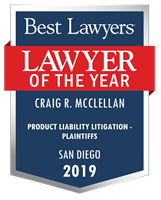 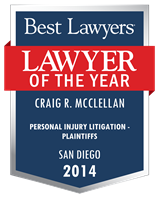 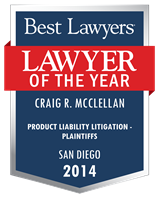 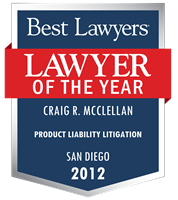 Craig R. McClellan is the first and only San Diego personal injury attorney selected for admission to the Inner Circle of Advocates, a prestigious invitation-only group of top plaintiff's attorneys, limited to 100 members nationwide.

Mr. McClellan has obtained more than 130 verdicts and settlements in excess of one million dollars, and is a three-time recipient of the "Outstanding Trial Lawyer Award" from the Consumer Attorneys of San Diego for cases in which million and multi-million dollar verdicts were obtained. One of his final arguments is featured in Million Dollar Arguments. He is a Fellow of the American College of Trial Lawyers, a member of the American Board of Trial Advocates and former President of the San Diego Chapter, a Master of the American Inns of Court, and a former Member of the Board of Directors of the San Diego Chapter of the American Business Trial Lawyers. He was a recipient of the Daniel T. Broderick III Award for Civility, Integrity and Professionalism. He has appeared on public radio and television programs, including 60 Minutes, 20/20, and the McNeil-Lehrer Report. One of his cases is featured in No Contest by Ralph Nader and Wesley J. Smith.

Mr. McClellan has focused his career on complex, high stakes litigation. His cases include complex personal injury litigation such as brain injury, wrongful death, pedestrian accident, car accident, motorcycle accident and truck accident cases, as well as defective product and product liability cases. As a business litigator, he represents businesses whose owners or shareholders have been harmed.