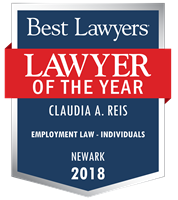 Ms. Reis, a frequent lecturer and speaker, is the immediate past President of National Employment Lawyers Association—New Jersey (NELA-NJ) where she was elected to serve for two consecutive terms. She also serves on the Executive Committee of the Labor and Employment Law Section of the New Jersey State Bar Association and is the Managing Editor of the Labor & Employment Quarterly. Ms. Reis is currently a Barrister with the Sidney Reitman Employment Law American Inn of Court (the “Inn”) and was the plaintiff’s Co-Chair for the Inn’s Programming Committing during the 2011-2012 year. She is also a member of the National Association of Professional Women as well as her local community's Affordable Housing Committee. Ms. Reis was selected for recognition as a New Jersey Super Lawyer in 2015 and 2014 and had been recognized as a Super Lawyers Rising Star from 2006 until 2013. She was selected for inclusion in Best Lawyers in 2016.