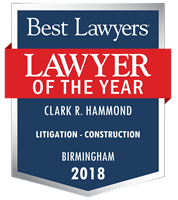 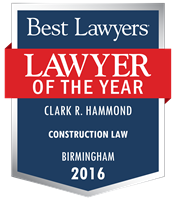 CLARK R. HAMMOND is a partner with Wallace Jordan Ratliff & Brandt LLC. He is also a member of the Firm’s Litigation practice group. Mr. Hammond practices primarily in the area of bankruptcy, commercial and real estate loan defaults and workouts, construction law, workout of defaulted municipal and commercial bonds, creditor’s and debtor’s rights, securities litigation and general commercial litigation. Prior to 1989, Mr. Hammond’s work included the representation of corporate debtors in Chapter 11 proceedings and the prosecution of civil actions involving commercial disputes, state and federal securities laws and construction litigation. He received his B.B.A. degree from the University of Miami in 1975, and his J.D. degree (cum laude) from Cumberland School of Law in 1984, where he was an Associate Editor of the Cumberland Law Review. Mr. Hammond is also a member of Curia Honoris, which is Cumberland’s highest academic honor society. From 1984-85, he served as law clerk to the Honorable Robert B. Propst, United States District Judge, Northern District of Alabama.

When Mr. Hammond is not practicing law, he enjoys spending time with his wife and three children. In addition, Mr. Hammond is active in his local church and serves as an elder.

Mr. Hammond is also an active official in USA Swimming. He is certified as a National Championship Referee and also served as a FINA Referee for 8 years as a result of being nominated by USA Swimming for that position. FINA is the international governing body of swimming, diving, water polo, synchronized swimming and open water swimming. He served as a member of the Board of Directors of USA Swimming from 2014-2018. He is the past Chair of the National Officials Committee for the officiating of competitive swimming for USA Swimming and is currently the Chair of the Rules and Regulations Committee. Mr. Hammond was formerly the Southern Zone Officials Chair. In his role as a national championship referee, he regularly oversees and runs both local and national caliber swim meets throughout the United States. He is also serves as the Safe Sport Chair and is a member of the Board of Directors of Southeastern Swimming, Inc.