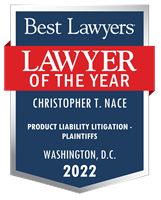 Chris was born in Washington, D.C. He graduated from Georgetown University with a degree in Government in 1998. In 2003 Chris graduated from Emory University School of Law where he served as Editor-in-Chief of the Emory Law Journal. Mr. Nace also earned his Masters in Business Administration from the Goizueta Business School at Emory University in 2003. While enrolled in Emory’s JD/MBA Program, Chris was recognized as the Rothfeder Family Scholar and was awarded the Emory School of Law Dean’s Public Service Award.

Chris is a Past President of the Trial Lawyers Association of Metropolitan Washington, D.C.

Chris has tried numerous medical malpractice cases to jury verdict in Washington, D.C., Maryland and West Virginia. Most recently Christopher secured a multi-million dollar settlements in a medical malpractice cases in Washington, D.C. and West Virginia. Christopher was also part of the team that secured a reversal of dismissal in a data breach case before the Circuit Court for the District of Columbia.

Mr. Nace has twice been awarded the American Association for Justice Distinguished Service Award, and is also a past recipient of the Wiedman Wysoki Award, the Heavy Lifting Award, and the Above & Beyond Award. He has been recognized by Best Lawyers, Super Lawyers, and Washingtonian Magazine.

"Christopher Nace is a great attorney! He is reliable and efficient and his firm knows the law!"

"We had a very successful outcome for our legal case that allowed us to stabilize our family's life after a brain injury. Yet it was the process of the case that was as important to us because we had so much to manage medically, emotionally, and mentally, during this challenging time. Chris Nace and his excellent team did not involve us unless they needed our attention, allowing us to place our focus where it was required, in our healing. Also, they spent time answering our questions no matter how trivial, since we had never used a lawyer except in the creation of our wills. We felt prepared for the case, and informed of our options, but yet not burdened by too much information. We were given adequate preparation for the next steps, but we were not overwhelmed by a multitude of responsibilities. As part of their client care, we were able to help protect our children and other family members from the rigors of an adversarial environment, and to go on with our lives instead of being involved in legal matters. I would recommend Chris Nace without hesitation, as he has the kind of doggedness and integrity that you want on your side, and because this organization has the expertise and experience that makes a level playing field out of the surprises and biases of the legal system."