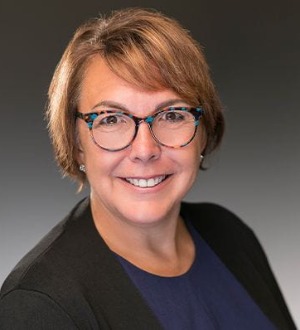 Catherine D. “Katie” Bertram started the Bertram Law Group, building on decades of experience as both a medical malpractice attorney and director of risk management at Georgetown University Hospital.

In those environments, she learned how doctors and hospitals work, as well as how their attorneys assess claims against them. She draws on this knowledge to advocate for patients and their families.

“People want someone who’s competent, caring, and careful. They’ve just gone through the worst thing in their lives and been betrayed by doctors or a hospital — people that we’re supposed to trust,” she said. “I can set forth what happened and why it was negligent.”

Bertram graduated from the University of Wisconsin-Madison with a bachelor’s degree in psychology and a bachelor of social work. While accompanying a social worker to court one day, she found her true passion—the law. “The minute I walked into court, I knew that’s what I should be doing,” she said.

She obtained her law degree from the Catholic University of America’s Columbus School of Law in Washington, D.C., in 1989, becoming the first lawyer in her family. The faculty nominated her as Woman Law Student of the Year.

Bertram focuses on personal injury and medical malpractice in part because her mother is a nurse. “It allows me to combine the law and medicine,” she said. “I enjoy talking to juries and teaching them about complicated medical cases in an easier way.”

Bertram has achieved several distinctions throughout her career. She is one of 20 people serving on the D.C. Bar’s Board of Governors and also is a board member of the D.C. Bar Pro Bono Center, which finds lawyers to meet the legal needs of D.C.’s low-income residents, nonprofits, and small businesses.

She’s been an adjunct law professor at American University’s Washington College of Law since 2013, teaching a course about medical malpractice. Among her charitable work, she is an active supporter of Public Citizen, the nonprofit consumer advocacy organization, and a founding member of the Washington, D.C., charity Power 100. She also sews quilts for military veterans through the Quilts of Valor Foundation.

Licensed to practice in Washington, D.C., and in Maryland, Bertram has a notable record of favorable verdicts. In 2017, she won $8 million on behalf of her clients against Edward Dunne, M.D., and Foxhall Urology, and in 2018, she won a $1.25 million verdict against Capital Women’s Care and others for negligence and negligent infliction of emotional distress.

But even though she and her firm have a strong track record, she and Heather J. Kelly also work hard to settle cases in their clients’ best interests. If they’re able to reach a settlement before formally filing the case, they’ll lower their fees.

A third-generation Washingtonian, Bertram enjoys spending time with her family and on the Chesapeake Bay when not in court.

She’s proud of the individualized attention that the Bertram Law Group provides.“I can limit the number of cases I take so I can work very hard on each case,” Bertram said. “We have the time and the creativity and the resources and the technology and the verdicts behind us like we’re a big firm, but you don’t deal with layers and layers of people. You’re getting the A team.”