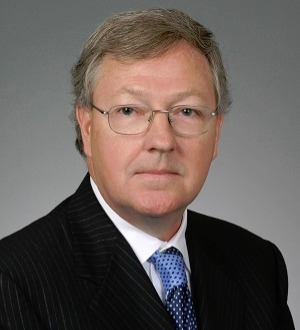 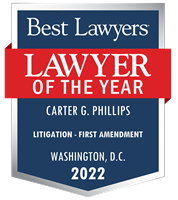 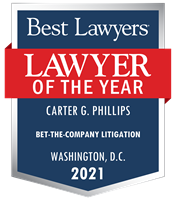 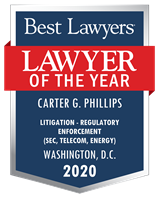 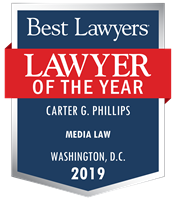 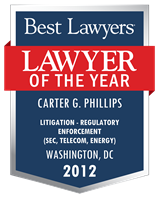 Carter G. Phillips is the chair of the firm’s Executive Committee and was the managing partner of its Washington, D.C. office from 1995 to 2012. He served as a law clerk to both Judge Robert Sprecher on the United States Court of Appeals for the Seventh Circuit and Chief Justice Warren E. Burger on the United States Supreme Court. Carter also served as Assistant to the Solicitor General. Carter Phillips has argued 75 cases before the Supreme Court since joining Sidley, which is more than any other lawyer while in private practice. He also argued 9 cases before the Court on behalf of the federal government during his tenure in the Solicitor General’s office, for a total of 84 arguments before the Court. Carter also has argued more than 120 cases in United States courts of appeals, including at least one in every circuit in the country, and more than 30 in the Court of Appeals for the Federal Circuit.

In recognition of Carter’s litigation success, he has been ranked among the nation’s top lawyers by Chambers USA, The Legal 500 United States, Benchmark Litigation, The Best Lawyers in America, Who’s Who Legal and the National Law Journal. Carter consistently is recognized by Chambers USA as being in the nation’s top tier of appellate lawyers and regularly receives the directory’s highest level “Star” ranking. That publication said that Carter is “one of the leading lights of the appellate Bar, described as ‘a truly unique talent’ whose incredible expertise sees him appear frequently before the Supreme Court.” Over the years, sources have told Chambers that Carter is “in a league of his own” with “a CV that stretches from the U.S. to London,” noting especially that he “enjoys a lot of credibility with the Supreme Court and has an amazing track record,” and that “there’s nobody quite like him on an appellate issue.” Benchmark Litigation also names Carter a “Litigation Star,” calling him “a household name” in the appellate world.

Carter’s practice has been featured in articles in Forbes, the American Lawyer, Business Week, Legal Times, the National Law Journal, USA Today and Legal Business (a publication in England). He frequently speaks at conferences, law schools and before industry groups regarding his experience before the Supreme Court.

228 The Best Lawyers in America® awards

77 Best Lawyers: Ones to Watch in America awards

"Carter Phillips is my all-time favorite lawyer for any matter!"

"Carter Phillips has handled two significant cases for us, including one before the U.S. Supreme Court. Much has been written and said about his legendary appellate work. It's all true. He is a brilliant lawyer with the best oratory skills I've seen. He is the go-to lawyer for bet-the-company cases."

"Carter Phillips is deeply experienced and sees across appellate issues to the big result."

"Carter Phillips is an extraordinary lawyer with impeccable people skills. He is always "top of mind" when selecting counsel."

"Carter Phillips is without equal in his experience and familiarity with the U.S. Supreme Court. I cannot imagine asking any other attorney to represent my company in that Court. Even with his superb reputation, Carter is extremely pleasant and easy to work with and a true gentleman."