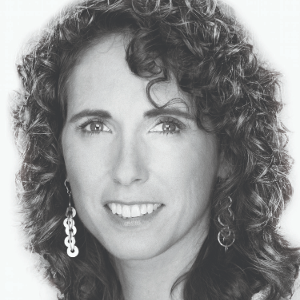 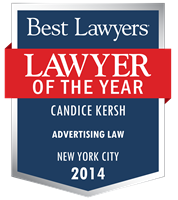 Recognized in 2014 as the New York "Advertising Lawyer of the Year" by Best Lawyers in America (the first woman ever to receive this recognition), Candice Kersh has been a member of Frankfurt Kurnit Klein & Selz’s Advertising, Marketing & Public Relations practice group for over two decades. Ms. Kersh is recognized as an industry leader in the advertising and media businesses. In 2016, she was recognized by Folio Magazine’s Top Women in Media - the only lawyer to receive this honor, and, in 2008, Ms. Kersh was the first lawyer ever named to the prestigious Advertising Age 'Women to Watch' list. Ms. Kersh has also received consistent recognition over the years by the most respected legal rating organizations. Chambers USA America’s Leading Lawyers for Business quotes her clients praise, saying she is "extremely intelligent" and "a tough negotiator." Ms. Kersh has been named a best lawyer in Advertising Law by Best Lawyers since 2010. The Legal 500 continues to recognize her as one of the nation’s leading lawyers in advertising, and Ms. Kersh has been repeatedly named a New York-area "Super Lawyer" by Super Lawyers magazine for Intellectual Property (2006), and for First Amendment & Media (2007-2013), and Media & Advertising, Intellectual Property, Entertainment & Sports (2014-2020). Ms. Kersh’s experience and creativity combine to make her one of the nation’s go-to attorneys for all issues of advertising and marketing law, including structuring branded entertainment deals, advising on emerging technology transactions and platforms, union issues, and helping major brands overcome legal hurdles to advance some of the world’s most celebrated and innovative advertising campaigns. She has a unique "appetite for the untried and undiscovered," and "a passion for helping sort through the issues and translating the solutions to other key stakeholders" according to Jeff Hicks, former President and CEO of Crispin Porter + Bogusky. In the past, Ms. Kersh has acted as production counsel on independent feature films, and negotiated agreements for writers, directors, and performers. Her experience with both Hollywood and Madison Avenue makes her an invaluable advisor to advertisers and agencies in their negotiations with entertainment firms and individual talent. In addition to her transactional and regulatory practice, Ms. Kersh also counsels advertising and entertainment executives and corporations on compensation packages and other employment matters. A frequent speaker at industry seminars and conferences, she also conducts internal seminars for her clients’ advertising, marketing, and public relations personnel. Ms. Kersh is a member of The Fellows of the American Bar Foundation and the Steering Committee for the International Marketing & Advertising Law Forum. Ms. Kersh is admitted to practice law in both New York and Florida.

26 The Best Lawyers in America® awards