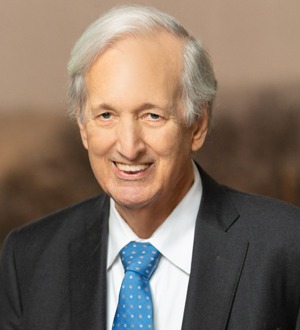 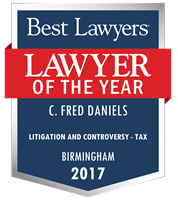 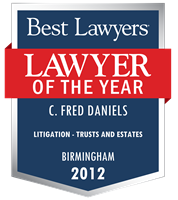 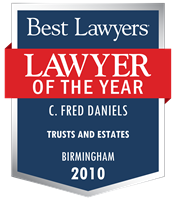 C. Fred Daniels is a partner in the firm’s Birmingham, Alabama office, where his practice emphasizes estate and gift planning, administration of estates, taxation, closely-held businesses, and litigation involving the rights and duties of personal representatives and beneficiaries. Mr. Daniels has been the lead trial and appellate counsel in numerous estate, gift and income tax cases including O’Neal v. United States, 258 F.3d 1265 (11th Cir. 2001) (establishing that, in the Eleventh Circuit, claims against a decedent are to be valued for estate tax purposes based solely on facts known at death) and Cleveland v. Compass Bank, 652 So. 2d 1134 (Ala. 1994) (establishing that, in Alabama, state law governs the source of payment of state estate taxes on QTIP trusts).

His recognitions include listings in The Best Lawyers in America in the fields of Corporate Law, Employee Benefits, Litigation & Controversy – Tax, Trusts & Estates, and Tax Law, and he has the highest rating assigned by the Martindale-Hubbell Law Directory. He has been named by Alabama Super Lawyers magazine as one of the top 50 attorneys in Alabama and is included in the 2008, 2009, 2010, 2011, 2012, 2013 and 2014 Alabama Super Lawyers’ list for Estate Planning and Probate. Mr. Daniels was elected to serve as Regent of the American College of Estate and Trust Counsel, and he is the past State Chair for Alabama and also the Chair of the State Chairs Steering Committee. He is a Past Chairman of the Tax Section of the Alabama Bar Association, and he has served as an Alabama delegate to the Southeastern Liaison Committee of the Internal Revenue Service. He was recently recognized by Best Lawyers as the “2012 Birmingham Litigation – Trusts & Estates Lawyer of the Year.”