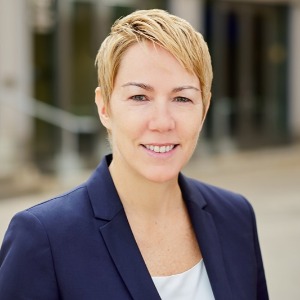 Navigate to map location for Barbara A. Robb Visit the website for Barbara A. Robb at https://hmrhlaw.com/our-team/barbara-a-robb/
Your comment has been submitted!
We have encountered an error and are unable to process your comment at this time. Please refresh the page and try again later.
Add Comment
In making your comments, please do not refer to a pending legal matter.
Share My Profile
Post on Social

Barbara A. Robb and her partners pioneered the firm’s nationally-ranked executive advocacy practice which focuses on the legal needs of executives, professionals and select businesses in sophisticated employment matters. In 2017, Chambers USA once again named Ms. Robb as a Leader in the Field of Labor & Employment, Mainly Plaintiffs Representation. According to Chambers, she can handle "complex situations and short timeframes" with "the most amazing intellectual horsepower." Clients further report that she is a “brilliant attorney” whose handling of sensitive situations “could not have been better.” Also in 2015, Ms. Robb was selected as a Fellow of the Litigation Counsel of America, a highly selective honorary society composed of less than one-half of one percent of American lawyers who are selected based upon their superior litigation and ethical reputations. In addition, Ms. Robb was selected by her peers for inclusion in the 2017 Edition of “Best Lawyers in America”, and has been listed by Thomson Reuters as a New England Super Lawyer since 2005. A member of the Massachusetts and Boston Bar Associations, Ms. Robb represents clients in a wide range of employment and compensation matters, including employment and change-in-control agreements, executive compensation, deferred and equity compensation, confidentiality obligations, non-solicitation and non-competition agreements, severance, retirement agreements, and buyouts of equity interests. She has successfully represented clients in complex, multi seven- and eight-figure matters. Her work includes claims for breach of contract, violations of the Massachusetts Wage Act, violations of the laws prohibiting discrimination and retaliation, sexual harassment, SOX, Dodd Frank and other whistleblower claims, violations of the Family and Medical Leave Act, and violations of the laws requiring reasonable accommodations for disabilities. As part of her practice, Ms. Robb handles complex litigation in state and federal courts, before arbitrators and at the Massachusetts Commission Against Discrimination (MCAD). She has handled many well-known and well-regarded litigation and appellate matters. For example, in the case of Joule, Inc. v. Simmons, Ms. Robb successfully argued before the Supreme Judicial Court that a private arbitration agreement does not restrict the power of the MCAD to investigate and eradicate violations of the Massachusetts anti-discrimination laws, including by awarding victim-specific relief. Ms. Robb also served as co-counsel in New Boston Select Group, Inc. v. Karen DeMichele, in which the jury awarded her female executive client a multi-million dollar verdict.