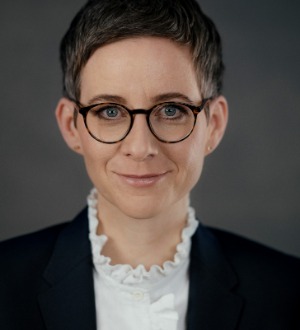 Dr Anna Katharina Gollan, LL.M. is an associated partner at POELLATH in Berlin.

She covers thus the entire spectrum of foundation and non-profit advisory – from the establishment of foundations to project structuring and investment of assets to advice on disputes with governing bodies. Another focus of her activity is succession consulting. Katharina’s clients include major foundations and non-profit organizations in Germany and abroad.

She is listed in various ranking publications in her areas of expertise.

As a member of the legislative committee on inheritance law of the German Bar Association (Deutscher Anwaltverein), she is a rapporteur for the reform of foundation law. She is also a member of the Federal Association of German Foundations‘ Committee awarding a seal of quality for good administration of non-independent foundations.

She is a regular blogger at the renowned German Handelsblatt and publishes on a regular basis in domestic law journals and commentaries as well as in international publications in her areas of expertise. She is a lecturer in a postgraduate programme (Inheritance Law & Succession) at the University of Muenster/Westphalia.

Anna-Katharina joined POELLATH in 2007 and was previously an academic assistant of the Institute for Foundation Law at the Bucerius Law School in Hamburg (Ph.D.; awarded the W. Rainer Walz prize of Bucerius Law School, 2009). She was admitted to the German bar in 2005 as an attorney and as specialist taxation lawyer in 2012. She studied law in Erlangen, Rennes (France), Munich and Muenster (LL.M.; 2009).

37 The Best Lawyers in Germany™ awards