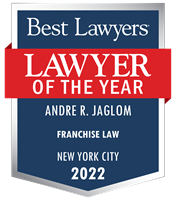 Andre R. Jaglom regularly counsels clients in the distribution and marketing field, including the establishment and restructuring of distribution networks; negotiation and preparation of domestic and international distribution and supply contracts, as well as franchise offering circulars and agreements; establishment of e-commerce distribution agreements; counseling with respect to distributor and supplier relations; negotiating and structuring business transactions; and handling dealer termination litigation. In addition, Drew assists clients with the development of corporate legal compliance programs in antitrust and other areas, as well as providing general corporate counseling to new and established businesses.

Drew has extensive experience representing clients in the food and beverage industry, including alcoholic beverage law and soft drink distribution, in computer law, and in representing trade associations and non-profit organizations. Drew was the principal draftsman of the New Jersey Malt Alcoholic Beverages Practices Act, which was signed into law on December 15, 2005. He is often quoted in beer industry trade publications, such as Beer Business Daily and Beer Marketers Insights, and in news articles on beer distribution.

For over twenty-five years, Drew has chaired the annual American Law Institute-American Bar Association (now ALI CLE) Course of Study on Product Distribution and Marketing, to rave reviews from lawyers who attend. Drew has spoken for many years on international distribution and marketing law and intellectual property protection issues at meetings of the New York State Bar Association International Section. He is Immediate Past Chair of the NYSBA International Section and Chair of its International Distribution, Sales and Marketing Committee. He served for eight years on the Computer Law Committee of the Association of the Bar of the City of New York, including five as Secretary.

For Programs of the International Law & Practice Section of the New York State Bar Association:

Liability On-Line: Choice of Law and Jurisdiction on the Internet or Who's In Charge Here?

Regulation of Privacy on the Internet in the United States

For the ALI-ABA Course of Study on Product Distribution and Marketing:

Managing Distribution: How to Develop a Corporate Legal Compliance Program

The Broad Scope of Franchise Laws: Traps for the Distribution Contract Drafter

Panel Chair, "To Market, to Market: The Pros and Cons of Alternative Methods of Distribution," Lisbon 2012

Panel Chair, "Developments in Competition Law in the European Union and the United States: Harmony and Conflict," London, 2005

Panel Chair, "Dealer Termination in the Americas: Can You Divorce a Dealer You Don't Love Anymore?," Santiago, 2004