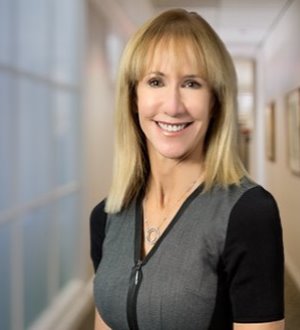 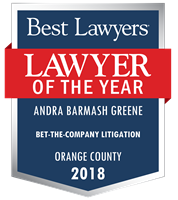 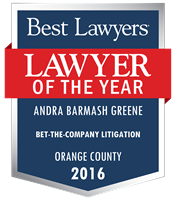 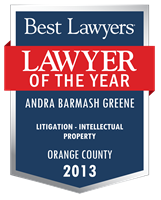 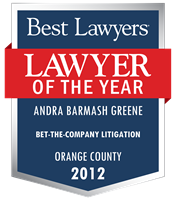 Andra B. Greene is a partner of Irell & Manella LLP, where she is head of the class action defense practice group. Ms. Greene previously served as Managing Partner of the firm's Newport Beach office.

Ms. Greene's results for clients illustrate why she is sought after for the most sensitive and high-stakes matters. Recent highlights include resolving high-profile consumer class actions for a well-known technology company, defeating a class action brought against a major sports venue by former workers, defeating whistleblower retaliation and discrimination claims against a professional sports team, and securing decertification and a dismissal with prejudice of a false advertising class action brought against a dietary supplement company.

Ms. Greene's victories on behalf of some of the country's most recognized companies have led to such accolades as being named one of the 2016 Top Women Lawyers in California by the Daily Journal and being named among the 2016 Top 50 Women Lawyers in the nation by the National Diversity Council. In 2016, she was also recognized as the Orange County Bet-the-Company "Lawyer of the Year" by Best Lawyers for her successful defense of cases including class actions. Ms. Greene was also honored as one of the 2014 Women Worth Watching by Diversity Journal.

Ms. Greene attended Harvard Law School for her J.D. in 1981 and received her B.A. from Brown University in 1978.