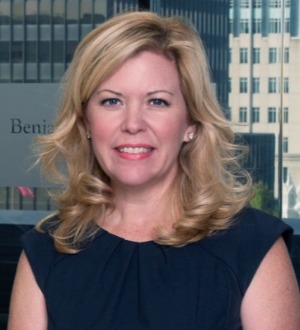 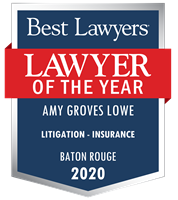 Practicing law since 1997, Amy Groves Lowe is a Partner at Taylor Porter, where she has a litigation practice in various areas of law, including insurance defense, labor and employment, education law, administrative law, appellate practice, and church property law. Amy has been selected for inclusion in Best Lawyers in America (peer-voted) in two areas: Education Law, for her work representing universities and high schools in labor and employment issues and insurance defense, and Litigation – Insurance, for her work representing various insurers in areas including personal injury, contract disputes, constitutional claims, employment, and others. Amy was selected by her peers as "Litigation - Insurance Lawyer of the Year in Baton Rouge" in the BestLawyers in America® 2020 rankings. “Lawyer of the Year” recognitions are awarded to individual attorneys with the highest overall peer feedback for a specific practice area and geographic location. Amy has more than 20 years of experience in representing public agencies, public employees and public officials in federal and state courts, in administrative hearings, and before the Louisiana Legislature. She has served as general counsel of the Louisiana State Board of Examiners of Psychologists for over 15 years and has represented numerous other public agencies such as the Louisiana Board of Ethics, the Louisiana Board of Private Security Examiners and the Louisiana Board of Cosmetology. Amy has also served as an Administrative Law Judge for several state agencies in disciplinary hearings. In addition to Amy’s litigation experience, she has a Master of Arts in Psychology (LSU, 1994). Amy has combined her expertise in these two areas by being frequently utilized as a jury consultant, assisting other litigators in jury selection, pre-trial research, and statistical analysis and serving as a litigation consultant in expert and lay witness preparation. In addition, Amy has conducted numerous CLEs and seminars on the issue of jury selection and effective and ethical presentation to juries and has been published in the Baton Rouge Bar Association journal on jury selection. In 2019, Amy was awarded the Alumna of Distinction from the LSU College of Human Sciences and Education. In 2005, Amy was named to Baton Rouge Business Report’s “Top Forty Under 40” for her successes in her practice and her commitment to the professional and community scene in Baton Rouge. Amy is an alumnus of the Baton Rouge Chamber of Commerce’s Leadership Baton Rouge class. In 2019, Amy was inducted into the University High Alumni Hall of Distinction. Amy (U-High, Class of 1988) is a board member of the University Laboratory School Foundation and the former President of the Cub Club parent association. Amy formerly served as president of the Junior League of Baton Rouge and was selected as Sustainer of the Year in 2019. She is an active member of First United Methodist Church where she serves as a Church Council Member, and Sunday School teacher for the Milestone class and the fourth grade class. Amy received her J.D. in 1997 from Paul M. Hebert Law Center at Louisiana State University where she was the winner of the Tullis Moot Court Competition and was admitted into the Law Center’s Hall of Fame. Amy was named an LSU College of Human Sciences & Education Alumna of Distinction in 2019.

37 The Best Lawyers in America® awards