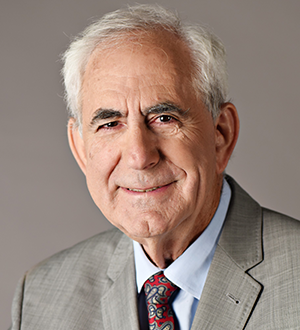 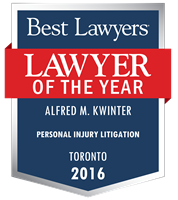 Alf earned his JD from the U of T in 1970. He and Morris Singer founded the firm in 1974. He has appeared at all court levels including the Supreme Court of Canada, where he appeared on behalf of the successful plaintiff in the landmark decision of Oldfield v. Transamerica Insurance. Alf has achieved some of Canada’s largest jury awards for punitive damages against an insurer. He acted for the plaintiff in the milestone case of Kamin v. Kawartha Dairy, which reduced the onus on plaintiffs in establishing liability in slip and fall claims. He obtained the highest award in Canada for chronic pain in Degennaro v. Oakville Trafalgar Hospital. Alf is certified by the LSO as a Specialist in Civil Litigation, is a past director of The Advocates' Society and Medico-Legal Society, and is a member of OTLA, TAS, the CBA, the ABA and AAJ. Alf is an Adjunct Professor at Osgoode Hall. The firm is consistently named by Canadian Lawyer Magazine as a top personal injury firm in Canada. He has twice been honoured by OTLA and is a recipient of the Excellence in Teaching Award by TAS. Alf received the 2015 OBA Award for Excellence in Insurance Law and was named the 2016 Best Lawyers personal injury litigation “Lawyer of the Year” Toronto. Alf is a Fellow of the American College of Trial Lawyers. 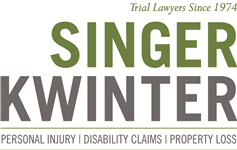