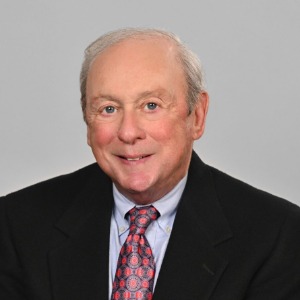 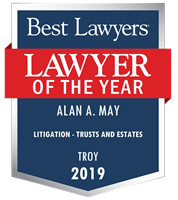 Alan May is a shareholder who is sought after for his experience in guardianships and conservatorships. He has written and lectured extensively and has taught classes at Wayne State University and Oakland University on these topics.

He was selected for inclusion in the 2007-2019 issues of Michigan Super Lawyers magazine featuring the top 5% of attorneys in Michigan and has been called by courts as an expert witness on issues of fees and by both plaintiffs and defendants as an expert witness in the area of probate and trust law. Mr. May maintains an “AV” peer review rating with Martindale-Hubbell Law Directory, the highest peer review rating for attorneys and he is listed in the area of Probate Law among Martindale-Hubbell’s Preeminent Lawyers. He has also been selected by his peers for inclusion in The Best Lawyers in America© 2020 in the fields of Trusts and Estates as well as Litigation – Trusts & Estates (Copyright 2019 by Woodward/White, Inc., of SC) and was named the Best Lawyers® 2019 Litigation – Trusts and Estates “Lawyer of the Year” in Troy. He has been included in the Best Lawyers listing since 2011. Additionally, Mr. May was selected by a vote of his peers to be included in DBusiness magazine’s list of 2017 Top Lawyers in the practice area of Trusts and Estates.