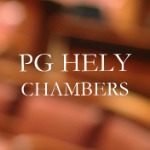 PG Hely Chambers is a set of commercial barristers chambers in Elizabeth Street, Sydney. It is named in honour of one of the great advocates of the Sydney Bar – the Honourable PG Hely QC – who was later a distinguished member of the Federal Court of Australia. It was established in January 2014 and currently comprises fourteen members (including four senior counsel).
Lawyer of the Year: ()
Recognized Since: Ones to Watch Since:
Location:
,
Recognized in:
Search Firm's Attorneys