Ledesma & Rodríguez Rivero is a law firm specialized in the areas of Constitutional Law, Amparo Action, Competition/Antitrust Law and Federal, State and Municipal Administrative Law, both concerning consultancy and litigation. It is conceived as a boutique firm characterized by providing a personalized service, tailored solutions to the specific needs of each case and a high degree of analysis for their cases. Their philosophy is based on the importance of developing a close relationship and close cooperation with all their clients to achieve genuine integration between them and the team of lawyers, to deepen the most in their interests and concerns.

One of the great qualities of Ledesma & Rodríguez Rivero focuses on the comprehensive study of all their cases. Due to such thorough examination, the firm has set strategies of remarkable scale and effectiveness in all their areas. Both Luis Manuel Rodríguez and Bernardo Ledesma have been recognized as leading lawyers in Competition/Antitrust Law by Chambers and Partners Latin America since their first publication in 2009.  The partners of Ledesma & Rodríguez Rivero have also been recognized as leading lawyers in their areas of expertise by institutions and publications such as Best Lawyers, Chambers and Partners, Who’s Who Legal,Latin Lawyer, among others. Ledesma & Rodríguez Rivero has been recognized by Best Lawyers as Law Firm of the Year in Antitrust and Competition for 2020.

Due to their expertise in the field of Competition/Antitrust Law, Ledesma & Rodríguez Rivero has participated in a number of working groups and expert lawyers in the field, and even with working groups of the Federal Competition Commission (the Commission or Cofece) itself, as well as in the ruling of several reforms to the Federal Economic Competition Law (LFCE) and its regulations. It has also being involved, as per invitation of Cofece, in various national and international forums in order to analyze particular cases and share experiences in such field, such as the International Competition Network (ICN), the Asia-Pacific Economic Cooperation Forum (APEC) and the International Bar Association (IBA).

Ledesma & Rodríguez Rivero has intervened in a number of investigation procedures concerning monopolistic practices, unlawful concentrations, barriers to entry and to economic competition, as well as other restrictions to the efficient operation of markets, derived from the Federal Economic Competition Law, as well as initiated an Amparo Trial against the LFCE, its regulations and acts of Commission. In several times, it has been Mexico’s Supreme Court itself responsible for solving various cases handled by the law firm, some of which have formed a court precedent and rules for the interpretation of the law.

Thus, since the establishment of the first Commission (1993), Ledesma & Rodríguez Rivero has been broadly and actively involved in counseling and litigation on subjects of Competition Law, wherewith they have been acknowledged and recognized as experts in the field, by the forum, and administrative and judicial authorities.

The firm has extensive experience in Administrative and Constitutional litigation and legal counselling. Therefore, their partners have participated as legal counsels for several government offices for the strategy development for conflict resolutions with a high degree of technical and procedure complexity. This experience has also enabled them to advise their clients in order to obtain the best results in various administrative procedures, as well as in administrative and constitutional law actions.

Ledesma & Rodríguez Rivero relies on several strategic alliances with a number of professionals of the highest level and experience, with which it shares essential values to offer its clients the best solution for their needs. The firm works as part of a team, with groups of lawyers specializing in the various areas of specialization, as well as groups of economists, accountants and others who have the most recognized expertise in each of their areas.

Law Firm of the Year Awards

"Law Firm of the Year" 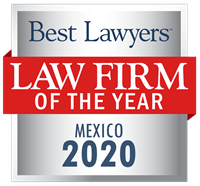 Mexico's 2020 "Law Firm of the Year" in Competition / Antitrust Law
Lawyer of the Year: ()
Recognized Since: Ones to Watch Since:
Location:
,
Recognized in:
Search Firm's Attorneys