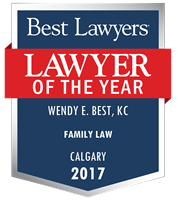 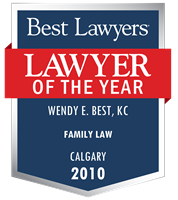 Wendy has a well-established family law practice and has earned ongoing recognition as a leading family law practitioner since being called to the bar in 1980. She joined Dunphy Best Blocksom in 1982 and became partner in 1986. Wendy was appointed Queen’s Counsel in 1994. She acts primarily for high net worth individuals and families. While she settles most matters, Wendy’s practice includes litigation.

She was inducted as a fellow of the International Academy of Family Lawyers in 2008. She has been selected by Best Lawyers in Canada annually since 2006 and was recognized as the Calgary Family Lawyer of the Year in both 2010 and 2017. In 2018, she was awarded both the Canadian Bar Association/Law Society of Alberta Distinguished Service Award for Service to the Profession and the Women in Law Leadership Award for Leadership in the Profession (Private Practice).

Wendy served as a member of the Alberta Securities Commission for six years and on the Law Society of Alberta’s Family Law Advisory Committee for five years. She was on the Board of the University of Calgary’s Student Legal Assistance for 11 years. Wendy was a member of the Canadian Bar Association’s National Council and served several of its committees.

Wendy balances her busy practice with regular cycling trips to countries with good food and wine.

9 The Best Lawyers in Canada™ awards