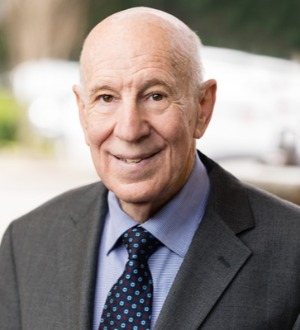 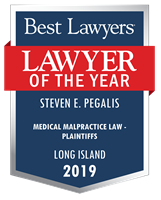 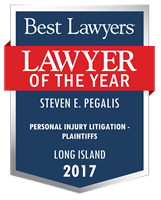 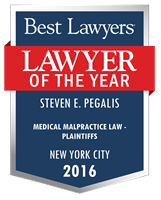 Steven E. Pegalis, Esq. is one of the nation's foremost plaintiffs' medical malpractice trial lawyers and the founder of Pegalis Law Group. In his 50-year career as an advocate for seriously injured victims of negligence, Mr. Pegalis has obtained some of the highest jury verdicts in New York State. Continuing his success over so many years, in 2019 he obtained a mediated settlement in the amount of $8.5 million dollars for a young woman who lost her mother as a result of medical negligence. That same year, he obtained a verdict in the amount of $4.7 million dollars, following his client’s treatment for a brain aneurysm. In 2018, he obtained a $10 million dollar court settlement for a client involving a complex spinal surgery case. He is one of only 5% of all U.S. attorneys to be listed in The Best Lawyers in America©, and has been named to the list every year since 2006.

Mr. Pegalis is most proud of providing peace of mind, a sense of justice, and financial security to clients. Stacks of photos and thank-you notes from clients’ families are among his most prized possessions. He believes his team’s personal investments in each case are without peer and has resulted in consistent success for clients year after year. He and his firm have worked tirelessly with over 2,000 injured individuals and their families. In 1998, he obtained a $116 million jury verdict for an infant who sustained brain damage due to negligence during breech birth, and in 2004 he obtained a $111.7 million verdict for a 6-year-old who sustained brain damage because of placental insufficiency. In 2019, Mr. Pegalis was awarded the “Lifetime Achievement Award for Community Leadership in the Law” by the New York Law School. He was the only lawyer named "Lawyer of the Year" by Best Lawyers® for 2019, for Long Island Medical Malpractice Law - Plaintiffs. He was also singularly named 2017 "Lawyer of the Year" on Long Island, for Plaintiffs' Personal Injury Litigation, and in 2016, was named "Lawyer of the Year," for Plaintiffs' Medical Malpractice in New York, by Best Lawyers®. Additionally, in 2016, he was honored with a "Lifetime Achievement Award" by the New York State Trial Lawyers Association (NYSTLA). In 2015, Mr. Pegalis was named co-director of the "Patient Safety Project" at New York Law School (NYLS), which focuses on making significant contributions to medical safety and promoting innovative health law policies for the public good. Also, in 2015, Mr. Pegalis was honored with the Nassau County Bar Association's "WE CARE Fund" award.

Mr. Pegalis is the author of American Law of Medical Malpractice, Volumes 1-3, now in its 3rd edition. He serves on the NYLS Board of Trustees, is an Adjunct Professor of Law, and was honored with school's "Groundbreaker Award" for a lifetime commitment to his clients, and successfully pursuing their rights with passion. He is an advocate of the American Board of Trial Advocacy, a Dean Emeritus of the New York State Trial Lawyers Institute, and a member of the American Association for Justice, and the National Board of Trial Advocacy. He is an Associate in Law of the American College of Legal Medicine, and is AV rated on Martindale-Hubbell for professional excellence since 1982. Each year since 2006 he is voted to the Best Lawyers® list in New York and the New York Super Lawyers list. Mr. Pegalis has lectured extensively on medical/legal issues and contributed his experience and viewpoint to numerous articles and publications. He is admitted to practice in New York, the U.S. Court of Appeals, 2nd Circuit, and the U.S. District Courts for the Eastern and Southern Districts of New York. He holds both a Juris Doctor and Bachelor of Law degree from New York Law School, and a bachelor's degree from Queens College of the City of New York.