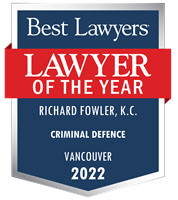 Richard Fowler, Q.C. regularly represents clients in all levels of Court in British Columbia and in the Yukon. He has extensive experience in both jury and non-jury trials of allegations such as murder, manslaughter, sexual offences, kidnapping, extortion, drug offences, fraud, dangerous offender hearings, and serious driving offences.

He has successfully argued appeals in the British Columbia Court of Appeal, the Court of Appeal for Yukon, and the Supreme Court of Canada. He has also appeared before the Review Board designated to assess the needs of individuals found unfit to stand trial or not criminally responsible because of mental disorder. He represents clients in courthouses across B.C. and Yukon as well as in Youth Court.

Richard has extensive experience working as part of a legal team on large, complex cases. His experience includes managing a team of lawyers representing one of the accused in the Air India case and he was co-counsel with David Gibbons, Q.C. on the successful defence of former B.C. Premier Glen Clark against breach of trust and fraud charges. 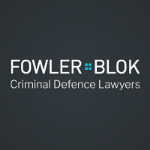 Accused acquitted of second-degree murder. The trial judge concluded that the Crown had failed to prove the identity of the person who inflicted the victim’s injuries and failed to prove that the victim’s injuries resulted from an unlawful act as opposed to an accident. The trial judge agreed with the defence that the Crown’s theory of motive was “preposterous.”
Read the case here: https://www.canlii.org/en/bc/bcsc/doc/2018/2018bcsc1632/2018bcsc1632.html

Appeal allowed and a new trial ordered for accused convicted of sexual assault. The Court of Appeal, in a unanimous judgment, agreed that the trial judge failed to provide sufficient reasons for accepting the evidence of the complainant and rejecting the evidence of the accused.
Read the case here: https://www.canlii.org/en/bc/bcca/doc/2018/2018bcca343/2018bcca343.html

Accused acquitted of dangerous driving causing death. The court recognized the fatal and tragic consequences arising from the accused’s excessive speed but agreed with the defence that there was at least a reasonable doubt that the accused’s conduct constituted a marked departure from the standard of a reasonably prudent driver. Cross examination at trial revealed that the accused’s excessive speeding was “momentary.”
Read the case here: https://www.canlii.org/en/bc/bcpc/doc/2018/2018bcpc133/2018bcpc133.html