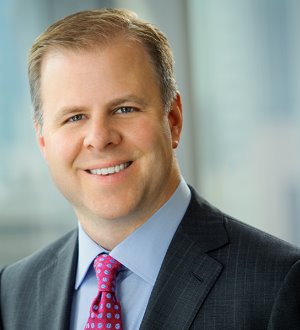 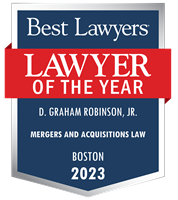 Graham Robinson focuses his practice on mergers, acquisitions and other transactions in the pharmaceutical, medical device and technology industries in the U.S. and internationally. He also regularly represents both private equity funds and hedge funds on a wide range of matters.

He repeatedly has been listed in Chambers USA: America’s Leading Lawyers for Business and The Best Lawyers in America. In 2013, Mr. Robinson was named by The M&A Advisor as one of the top 40 M&A professionals under the age of 40 in the United States. In 2011, he was named by the Boston Business Journal as one of its “40 under 40” business and civic leaders in the city of Boston. Mr. Robinson is a member of the board of fellows of Harvard Medical School, an overseer of the Boston Symphony Orchestra, a member of the board of directors of the Massachusetts Chapter of the March of Dimes and a member of the American Bar Association.

Mr. Robinson is a member of the board of directors of Project Step, a nonprofit organization that seeks to identify musically talented children from underrepresented Boston communities, provide them with comprehensive music and string instruction, and prepare them to compete and succeed as professionals in the world of classical music.

Prior to joining Skadden in 2012, Mr. Robinson served as the chair of the corporate practice and was a member of the mergers and acquisitions group of another international law firm.

154 The Best Lawyers in America® awards

63 Best Lawyers: Ones to Watch in America awards